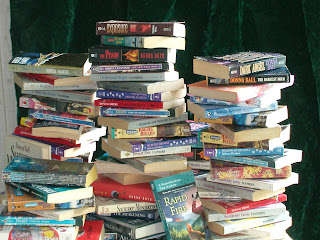 These are tough economic times for all of us. If you don't believe me, turn on the news. Or try making your living as a writer of novels in an age where Sarah Palin, Joe the Plumber, and Miley Cyrus command seven figure advances-- and the top spots on the best sellers lists (not that I have issues or anything:)) Yet even in the current economic climate I feel blessed. Did I say blessed? No, I feel rich. I feel obscenely wealthy, I feel absolutely hedonistic; I am rolling in abundance. Why? Because it's December: the longest, darkest night of the year is approaching, and on my bedside table is a stack of crisp, new, unturned hardcover books.
I am almost afraid to open them. Sometimes I just walk around the table, looking at them. Occasionally my hand will drift toward one of them and stroke its glossy cover and then quickly, shyly, withdraw. I don't want to use up the magic too soon. It's only December, after all.
There have been winters when I was not so fortunate. There was a brief, glorious heyday in the nineties when publishers could be counted on to deliver a veritable plethora of good, solid guaranteed-to-entertain commercial fiction on their fall lists: Stephen King, John Grisham, Michael Crichton, Dean Koontz , P.D. James, Elizabeth George, to name but a few. And, later in the season, around the time we in the mountains are seriously thinking about killing something (hopefully not our neighbor), there was the lighter fare-- Mary Higgins Clark, Lilian Jackson Braun, Elizabeth Peters, and Susan Conant's delightful dog mysteries. And of course, every once in awhile, we'd be thrown a real bonus: A Harry Potter, or a Dan Brown. Ah, those were days of wonder and delight. But eventually it was over, as all good things inevitably are. Someone missed a deadline. Someone screwed up a contract. Someone else failed to sell enough copies of his last book to justify a lead position in the fall, and someone, well, passed on (although it seems to me he or she might have made arrangements for the delivery of the manuscript in case of just such an eventuality). The bottom line: it was December, and I faced a long, cold winter without a single thing to read. I don't like to talk about it. I don't even like to think about it.
But this year is different. I have books. I am rich. Who is waiting on my bedside table to see me through the cold, the dark, the dismal, rainy, slushy, bone chilling, snow-caked days ahead? Dean Koontz, Margaret Maron, Philip Margolin, Nelson DeMille and-- even though it sounds like an entry in a "which one doesn't belong?" problem on a grade placement exam--Carlos Ruiz Zafon. The latter was presented to me by my friend Claudia with an earnest thank you for letting her borrow it. I replied, "I'm so glad you enjoyed it, but I didn't loan it to you." Without missing a beat, Claudia pressed the book into my hands and insisted earnestly, "If you haven't read this book, you're going to love it." Okay, Claudia. Counting on you.
My needs are simple. I don't need a masterpiece. I just need a story. Don't try to change my life; just change my afternoon. Don't let me down, Dean. I believe in you, Nelson. I can't make it without you, Margaret. Don't disappoint me, Phillip. I need you guys.
After all, it's cold out there.
Posted by Donna Ball at 6:45 PM 1 comment: 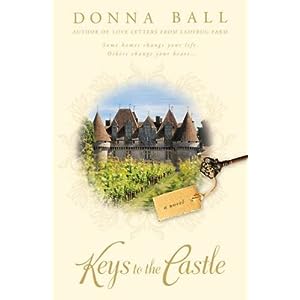