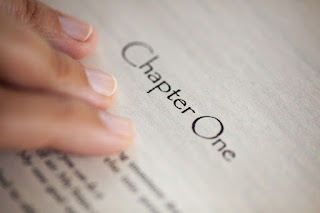 If you are a writer, a wannabe writer, or just someone who likes to know how writers think, this is the place for you.  In upcoming posts we'll talk about how stories are born, how ideas  translate into words, and how words bring thoughts to life -- among many, many other things.  I hope you'll check in often.

This blog has been dark for--hard to believe!--9 years, and a lot has changed since then.  It's not that I didn't want to reboot it, it's just that I didn't know where to start.  And the longer I put it off, the harder it became to find that starting point.  Kind of like writing a novel.

So you've got this great idea for a book.  You more or less know what happens in your story, you've chosen the characters who will tell your story, and you know what you want to say.  But where do you start?  As a general rule, there are three places to open your book: at the beginning, the middle and the end.  It's up to you to decide which opening is the best one for you.

The temptation is to take the default position and start at the beginning.   Unfortunately, this is often the most boring place to open a book.   "Johnny was born to an immigrant family of five who settled in Ohio in 1908..."  If Johnny is your main character, how many pages do we have to read before something happens to him that makes this a story worth telling?  If you can't wait to get to the "good part", neither can your reader.  So eliminate everything but the good part.  Start there.

Some of the most interesting books start in the middle.  Think about  Cormac McCarthy's The Road .  The man and the boy are on the road when it opens.  We don't know why.  We don't know how long they've been traveling.  Whatever cataclysmic event propelled them on their journey is in the past; we join them in the middle and we are immediately sucked in.  There's a lot to be said for grabbing your reader and pulling her right into the story.

Some writers shy away from starting with the end because they're afraid of giving away too much.  However, done skillfully, opening with an outcome that's already predetermined will only make your reader anxious to know what happened before that point and how your characters got there.  Think of the classic opening to Love Story : "She loved Beethoven, the Beatles, and me."  The use of the past tense "loved" tells us the heroine is no longer with us; we want to know why.  In Jane Harper's Force of Nature,  something terrible has already happened when the book opens: search parties have been called in for a group of women who disappeared in the wilderness on a corporate retreat. Only as the story unfolds do we travel into the past, meet each of the missing women, and discover through their eyes what went wrong. My book, The Dead Season, opens at the end of the adventure, with our heroine being escorted into a police car after something very bad happened on a mountain during a blizzard.  You don't want to over-use the device, but opening at the end can generate a powerful sense of intrigue that makes the reader want to read more.

Whether you choose to start your tale at the beginning, the middle or the end, all successful openings have one thing in common: they start when something changes.  We'll talk about this more in upcoming posts, so I hope you'll stick around.

I've little doubt that history will look back on 2020 as the year when things changed for a lot of us.  Maybe it will also be the year you finally decide to write that novel you've been thinking about. If so,  you've got a great adventure ahead, and I'd love to share it with you through this blog.

So what do you say?  Let's get started!