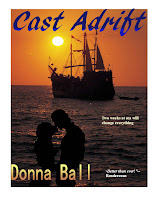 CAST ADRIFT  She was a marine biologist on a quest to find a dolphin; he was a sailor with no time for sentiment.  But two weeks alone at sea could change everything...
When last we met, I was trying to think of all the advantages to being published by a major New York publishing house.  Here they are:

1) The advance.  I think we all can agree that a  $25,000 advance from a publisher is appreciably better than $25 a month for uploading your self-published book to Kindle.  At least, it sounds better.  No, it is better, really--- at least, it would be better, if only publishers would actually pay it in advance.  Here’s the way it breaks down:
1/3 on signing of the contract.  This means approximately 3-4 months after the deal is struck.  If you are writing the book on spec, you’ve probably completed it by now.
1/3 on delivery and acceptance.  If you submitted a complete manuscript, one would assume that the book was accepted when the publisher actually went to contract on it, but nooooo.  Acceptance can come six months to a year later, after the editor re-reads the manuscript, sends you notes for revision, reads your revisions, approves them, forgets to put in a request for payment, you get the idea.  And that’s if all goes well.
1/3 on publication .  Most contracts allow for publication 18-24 months after acceptance of the manuscript (see above); a semi-alert agent will change that to 18-24 months from the date of the contract which, as we have already seen, can be 3-4 months after actually selling your book.  So you’re quite possibly  looking at three years before you receive your final payment.
$25,000 divided by 3 years equals $8,333 per year which is just about 10 self-published Kindle books a day at 2.99.
The average advance for a first-time author, by the way, is still around $5000.  Divide that by three years.

2) The distribution.  My books are supported, published and distributed by Penguin USA, a pretty big player in the New York publishing biz.  Dave’s book is published, supported and distributed by–well, Dave.  In an informal tour of five independent bookstores within a twenty-five mile radius of where I live, Dave’s book was prominently featured beside the New York Times bestsellers in the windows of four of them.  My books were not carried.

3)Marketing and Promotion.  The publisher’s job is to sell your book.  That’s why they get 90% of your money, right?  But so much has been written about the publisher’s failure to do exactly that that the whole thing has become a cliche, a joke that has been told so many times it’s not even funny anymore.  Bottom line: Every over-worked, underpaid publicist on staff at Big New York Publisher is responsible for 50-100 titles every campaign period (roughly 2 months before the book is published to one month after).  Dave is responsible for one book.  Only.  His whole life.  Dave has time to chase the radio interviews, the cable t.v. spot, the book signings, the reading group appearances, the blogs, the lectures.  Dave knows somebody who knows somebody who can arrange a major signing at Barnes and Noble with print advertising tie-in.  My publicist is only allowed to arrange two events for me per book.  Let’s hope someone shows up at one of them.

3.Reviews.  It is absolutely, positively true that the one advantage a major New York publisher has is the ability to get your book reviewed in the trades.  Booksellers read the trades, and decide what books to order.  Movie producers read the trades and decide which books might be worth optioning for film.  Foreign rights agents find their next purchase in the trades.  A quote from Publisher’s Weekly or Library Journal will live on your book cover forever.  This is huge.  And huge would be the word to describe the number of books that cascade onto  the desks of trade publication reviewers every day.  Ditto the major newspapers and magazines.  It took two years for my last book to be reviewed by Publisher’s Weekly.  Nice quote, but it would have been even nicer had we been able to use it to actually sell the book.  Meantime, I get great reviews from amateur bloggers... just like Dave.

4.Okay, I’ve been sitting here with my arms crossed for five minutes and I really can’t think of Number Four.   I can think of things that should be true, or used to be true, but here is what I think is really true about the advantages of being published with a major New York publisher: If you are a multi-published, midlist author with a fan base, the difference between being published in New York and publishing yourself is so small as to be almost indiscernible, with the advantage leaning ever-so-slightly toward the self-publishing and promoting side.  If you are first-time author who takes his career seriously, I still think you need the credibility of having been published in New York .  Earn your stripes, and move on.  I think this for absolutely no reason other than the fact that I had to do it.
On the other hand, if you just want to see your book in store windows, do book signings, radio and television interviews, see your picture in the paper, have people talking about your work, and cash lots and lots of checks... may I introduce you to my friend Dave?