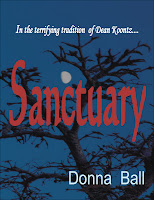 I hardly ever use this blog to promote my own work-- well not much, anyway! --but I have had such an interesting experience preparing SANCTUARY

for release that I thought it was worth commenting on.  Briefly.

A few years back (quite a few, actually!)  I sold what is called a "breakthrough" novel (THE PASSION by Donna Boyd

) at auction for a great deal of money.  I had been a hardworking, steadily selling midlist author until this point for ten years, and I understood that what I had written was  really, really good.  I thought it deserved all the attention it was getting.  But when my editor said to me, "It must feel wonderful to write such an extraordinary book!" I remember replying, "Yes, it does.  But this isn't the first extraordinary book I've written.  It's just that no one noticed the others."

is one of the books that no one noticed.

In the early nineties, I sold the manuscript for Sanctuary to a  somewhat cheesy publisher for a set of outrageous promises and  less money than I had ever been paid in my life. Said publisher then changed the title, insisted upon changing some essential elements of the story, slapped on a cheap cover, and printed probably 2000 copies.    I'm sure I was heartbroken at the time.  To tell the truth, I've been heartbroken so many times I can't remember.  I know I moved on.  I wrote twenty or thirty more books, some of which were even extraordinary.  And no one noticed.

Fast forward fifteen years. The rights have reverted to me (believe it or not there was a TEN YEAR license in that contract) and we live in a new and glorious age in which authors can actually control the fate of their own work.  I found an old copy of Sanctuary (its original title, not the one under which it was published), dusted it off, and began to read. I discovered something wonderful, and terrible.  The wonderful part was that I couldn't put it down.  I was the author, I kind of (but not entirely) knew what was going to happen, and I was rivetted. There were places where I honestly couldn't believe I had written that book.  Which leads us to the terrible discovery: I was a much better writer then than I am now.

I don't know what happened.  Too many heartbreaks, too many capitulations to an industry in which field  salesmen  had more input into a writer's work than the editor with the MFA degree did; too many rejection letters condemning me for writing exactly what the publisher announced at last month's conference they were looking for.  Too many print runs that didn't even cover the advance.    Too many vampires.

There is a technique of behavior modification in which a negative reinforcer (i.e. electric shock) is paired with the undesirable behavior (i.e. smoking) to create such an unpleasant association in the subject's mind that the behavior is extinguished.  The pain simply isn't worth it.  I think that, over the years, that's what happened to the spark of passion that drove all of my best work: writing a novel, and submitting it for publication, became so associated with pain that it just wasn't worth it.  Clearly, I continued to write and to sell.  But I think that, as I grew more and more enmeshed in the publishing industry, I put less and less of myself into the process of creating the work.  I stopped being extraordinary.  The pain wasn't worth it.

But that was then.  This is now.

I currently have three proposals under submission to print publishers.  If I receive an offer on any of them, I will accept it, because print publishers pay in advance and I need to survive.  But I have just realized that, after these proposals have run their course,  I will not  go knocking on New York's door again.  Ever.   The reason is not  because I can make more money self publishing(J.A. Konrath and  Amanda Hocking nothwithstanding) because at my current rate of return I will starve to death on e-book royalties.  But if I am going to be a writer, I need to be  that. I need to write my best.

Stand by for something extraordinary.
On Writing

soulquest said…
Hey what a brilliant post I have come across and believe me I have been searching out for this similar kind of post for past a week and hardly came across this. Thank you very much and will look for more postings from you Get for more information personal growth mentor