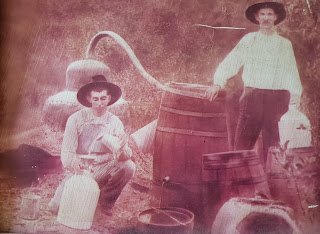 My ancestors came to the hills of north Georgia in 1782 and built a log cabin on a flat piece of ground in a cedar grove which, by the time I was growing up, had long since been replaced by a chicken coop.  They were a rough lot, having migrated from Scotland to the mountains of Virginia/North Carolina almost a century earlier as outlaws fleeing some kind of political persecution—or at least that’s the story the family tells.  I’m not at all sure about the political part, but outlaws—yeah, I can see that.

The bedtime stories of my childhood were not necessarily fairy tales. Southerners have a notoriously celebratory relationship with the macabre, and one of my earliest memories is the tale of a Creek ancestor of mine who had the temerity to marry into our family. Apparently, he was not widely embraced as an in-law.   He was found one morning floating face-down in a creek that bounded our property, “his long white hair streaming out behind him”.  The law ruled it suicide, but was it?

My great-grandfather shot and killed his neighbor in a dispute about cows one morning while walking to work.  His nine year old son, my grandfather, was with him at the time and was later called to give testimony in court.  For as long as I knew him, my grandfather was terrified of going to the courthouse, even for something as innocuous as getting his driver’s license.

That same grandfather had a mysterious relationship with alcohol, the stories about which went even deeper underground when he married a Baptist (think: Grandpa Walton from The Waltons).  The mystery became slightly more comprehensible when, as teenagers, my brother and I visited a historical display about early Appalachian life with our parents and my father demonstrated a far more intimate knowledge of the workings of a moonshine still than the historian who was giving the lecture.  Evidence eventually led us to believe that my dad—who was already right out of Central Casting with his 1950s James Dean good looks—ran moonshine for a living before meeting and marrying my mom who was, unfortunately for him, another Baptist.

Readers will recognize the stories of my two ancestors—one dead in a creek and another accused of murdering a man over a cow—as elements from Murder Creek (Raine Stockton Dog Mystery  #14).  For these and other reasons, people often ask me if my character, Raine Stockton, is based on myself.  I always answer No, because—except for our love of dogs-- we are so different in every possible way. I cower in a corner when I hear a nail gun fire, much less a hand gun. She runs in to save the day; I lock the doors, hide under bed and dial 911.  Whereas Raine is always asking “Who? Where? How? Why? ” my tendency is to shrug and figure someone else will take care of it.

Of course most of this is simply the difference between a fictional sleuth and a real-life writer.  Given the legacy of my ancestors, I had no choice but to become a mystery writer, and every part of Raine Stockton carries a little bit of my DNA.  The house she lives in is actually the farm house my family built overlooking the cedar grove—and the chicken coop--  in 1880.  I still carry that faded photograph of them, standing so proudly on their newly-built front porch, in my mind.  The Feed & Seed where Raine buys dog food is in reality only 3 miles from my current home, and I buy dog food there too.  The courthouse, which, as faithful readers know, plays such a dramatic part in Raine’s life, is an exact replica of the courthouse in the tiny north Georgia county where I grew up… and in which my grandfather refused to set foot for years.  I’d be lying if I said that certain characters—and events!—were not based on memories of my youth.  God willing, they will never recognize themselves in any of my books.

Although the property on which my ancestors built that first log cabin over two centuries ago has long since been covered in tract homes,  I feel no sense of loss.  That place, and the pioneers who settled it, will live forever in my imagination.  Their stories will continue to be told by Raine Stockton, and characters like her, as long as I am able to give them voice.   And, like all good stories, their telling will only get better over time. 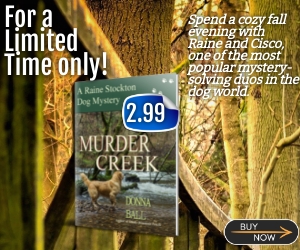